6-Hour Virtual Seminar on Harassment in the Workplace: Effectively Dealing with Harassment and Its Relationship to Discrimination, Retaliation, and Hostile Work Environments

Recorded: Access recorded version, only for one participant unlimited viewing for 6 months ( Access information will be emailed 24 hours after the completion of live webinar)

Corporate Recorded: Access recorded version, Any number of participants unlimited viewing for 6 months ( Access information will be emailed 24 hours after the completion of live webinar) 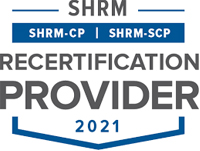 Viewing this 6-Hour Virtual Seminar, its entirety qualifies for a recertification credit hour that may be counted toward SHRM-CP and SHRM-SCP recertification from SHRM. Credit is awarded based on the actual educational time spent in the program.

When an employer receives an allegation of workplace harassment, taking prompt and appropriate action is the employer's legal responsibility. It is imperative that employers understand how to recognize harassment, evaluate the scope of their internal investigations, document steps taken along the way, and insulate their organization from subsequent lawsuits.

Additionally, it's also important for employers to ensure all parties are treated fairly during the process and be sensitive to how the organization's process is communicated and implemented.

Workplace harassment isn't limited to sexual harassment and doesn't preclude harassment between two people of the same gender. The harasser can be a boss, a supervisor in another department, a co-worker, or even a nonemployee. The victim doesn't necessarily have to be the person being harassed; it can be anyone affected by the harassing behavior.

Retaliation claims are costly and time-consuming for employers. Missteps in handling sensitive employee issues could result in the organization writing a check with a lot of zeros.

How companies investigate potential misconduct can affect the company's reputation as well as its bottom line.  Because cultural and generational diversity is changing the landscape of the U.S. workforce, that diversity can become fuel for all types of litigation. Understanding how to recognize harassment and effectively conduct workplace investigations can greatly reduce the chances of an organization being sued.

An employer can avoid or reduce liability by taking appropriate preventative measures. Participants will learn the best practices employers can employ to minimize the likelihood of retaliation violations.

Why you should attend

While no employer wants to be accused of harassment, all employers need to be armed with the knowledge of how to proceed should they find themselves in the position of having to defend themselves against a harassment charge.  Employers must ensure they are properly prepared at the outset of an investigation to conduct effective and legally-compliant investigations into the harassment.

Employers first need to understand exactly what harassment is: unwelcome conduct from a boss, coworker, group of coworkers, vendor, or customer whose actions, communication, or behavior mocks, demeans, puts down, disparages, or ridicules an employee. Physical assaults, threats, and intimidation are severe forms of harassment and bullying.  Harassment may also include offensive jokes, name-calling, offensive nicknames, pornographic images on a laptop, and offensive pictures or objects. Interfering with an employee's ability to do his or her work also is considered a form of harassment.

Employers often overlook the importance of promptly investigating complaints of harassment and taking quick and appropriate corrective action. Since an employer's prompt and effective response to complaints can limit or eliminate its liability in a discrimination, harassment, or retaliation lawsuit, it is imperative that employers implement an effective mechanism to investigate and resolve workplace complaints.

Charges of harassment in the workplace can result in costly consequences for companies. In 2017, the EEOC handled 84,254 charges and secured more than $125 million for victims of harassment and discrimination in private, federal, state, and local government workplaces.

From fact-finding to conducting interviews and writing reports, participants will gain the knowledge needed to recognize harassment in their workplace and confidently and effectively conduct investigations.

Diane holds a Master Certificate in Human Resources from Cornell University’s School of Industrial and Labor Relations and has attained SPHR, SHRM-SCP, sHRBP and HRPM® certification. Diane is a member of the National Association of Women Business Owners and the Society for Human Resource Management. Additionally, Diane performs pro bono work through the Taproot Foundation assisting non-profit clients by integrating their Human Resources goals with their corporate strategies.